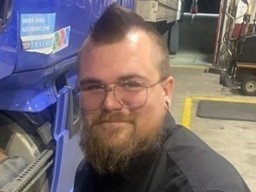 Driving unfamiliar roads can be unnerving, especially when a freak incident puts you in harm’s way. That’s what happened to a TA guest in Texas when suddenly, a pair of jeans were carelessly tossed from the passenger’s window of the vehicle in front of her. Unable to avoid the collision with the discarded dungarees, she ran over them and they became lodged beneath her car. The next sound she heard was the clankety…clank…clank of metal scraping the highway. The jeans had tugged a piece of metal from the car’s underbelly.

“As a female alone in an area I didn't know – somewhere between Austin and San Antonio – I was stressed for sure,” she posted in a Google Review. Fortunately, she found her way to the TA at New Braunfels, TX , where Technical Quality Manager Larry Farmer, greeted her with a warm welcome.

“I could see she was frazzled from the experience and didn’t know what to do,” he explains. Since his technicians were tied up with other work, he directed her to pull into one of the empty bays to take a look. Minutes later, Farmer was able to remove a small piece of metal that had been making all the racket. Problem solved.

“I am so grateful for the kind service I received from these people. These men helped me out quickly and easily and had me on my way in no time. I am so thankful because it made what could have been a stressful event into a minor inconvenience. Thank you again!”

When she inquired about payment for the service, Farmer simply asked her to ‘pay it forward.’ “We get people in all the time with tail light issues, low tire pressure, little things. We don’t mind helping out. The biggest thing is to return every traveler to the road better than they came.”