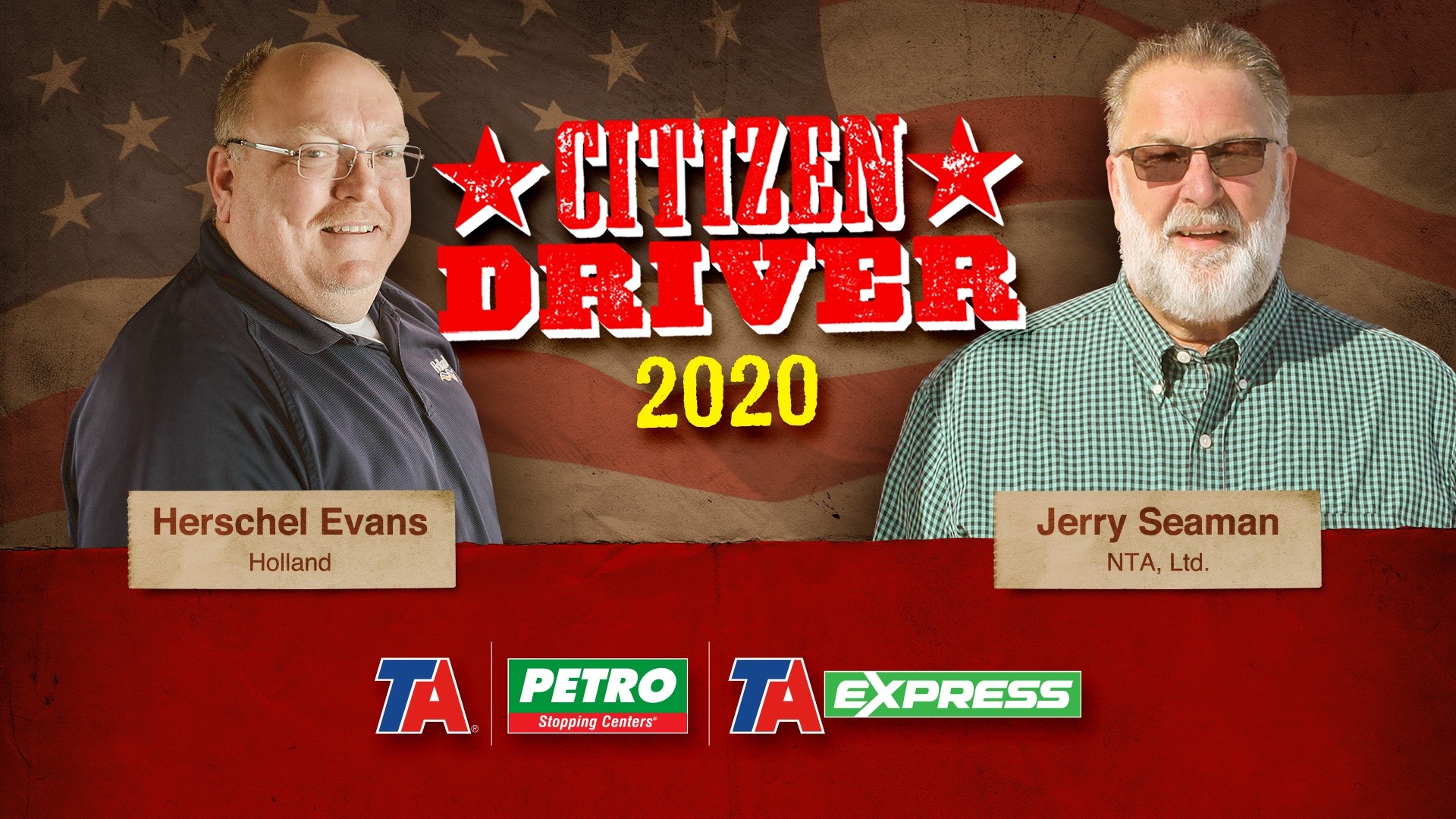 As part of the honor, Citizen Driver Award winners may select a TA, Petro Stopping Center or TA Express location to be dedicated in their name, allowing their story to be continuously displayed for all travelers that pass through. In addition, TA will make a $2,500 donation to each winner’s charity of choice.

“The goal of the Citizen Driver Program is to put a spotlight on some of the most extraordinary drivers today and illustrate the fine examples of professionalism embedded in the truck driving profession,” said Barry Richards, president of TA. “These drivers dedicate their lives to their career and we’re pleased to honor them and highlight their life-long commitment and sacrifices.”

Details about the honorable lives of Mr. Evans and Mr. Seaman are listed below:

Herschel has a 32-year driving career and is currently employed by Holland, Inc. He has logged 3.1 million miles, all accident-free. He is a strong advocate for safety, evidenced by his volunteer work on numerous safety committees and boards. Herschel has been interviewed by commercial and industry media for his expertise and input regarding safety regulations and is a well-known speaker and presenter on the topic within the industry.

Herschel received the 2018 Commercial Vehicle Safety Alliance International Driver Excellence Award. In 2013, he was selected as an American Trucking Association’s American’s Road Team Captain. In 2017, he was presented with the Mark Russell Trucking Image Award for representing the industry through his role as an America’s Road Team Captain. Herschel is also a trainer for Holland, and ensures that all new hires begin their career with a solid driving foundation and a strong priority on safety.

Herschel has devoted countless hours to Convoy of Care. For the past 33 years, he has been involved with Atlanta Ride for Kids, a nationwide motorcycle charity ride that benefits the Pediatric Brain Tumor Foundation. In 2011, Herschel took over an intercompany truck driving championship and turned it into the Safety Drive for a Cure benefitting the Pediatric Brain Tumor Foundation.

Herschel has chosen the Pediatric Brain Tumor Foundation, Safety Drive for a Cure as his charity to receive the $2,500 donation. The Petro in Atlanta, Georgia will soon be dedicated in his name.

Jerry has a 48-year driving career and is currently employed by NTA Trucking, LTD. He has logged more than 5 million miles in his career, all accident-free. In 2010, Jerry was chosen as the NASTC Driver of the Year and as a member of their 2010 America’s Safe Driver Team. In 2011, Jerry began competing in the South Dakota Truck Driving championships. He received a first place finish in the 5-axle van class, received Rookie of the Year, the Larry Thury award and was named Grand Champion. He also competed in the American Trucking Association’s National Truck Driving Championships.

Jerry is a lifetime OOIDA member and a member of the Truck Historical Society.

Jerry has chosen the St. Christopher Trucker’s Relief Fund as his charity to receive the $2,500 donation from TA. The Vermillion, South Dakota TA Express will soon be dedicated in his name.

The following distinguished members of the trucking industry served as this year’s judges:

TA launched the program in 2013 with the intention of recognizing the professional drivers who keep America moving. To date, 35 Citizen Drivers have been awarded with this prestigious honor. Information about the 2021 Citizen Driver nominations will be posted soon. For more information, visit ta-petro.com/citizen-driver.

About TravelCenters of America

TravelCenters of America Inc. is the nation's largest publicly traded full-service travel center network. Founded in 1972 and headquartered in Westlake, Ohio, its more than 21,000 employees serve customers in over 260 locations in 44 states and Canada, principally under the TA®, Petro Stopping Centers® and TA Express® brands. Offerings include diesel and gasoline fuel, truck maintenance and repair, full-service and quick-service restaurants, car and truck parking and other services and amenities dedicated to providing great experiences for professional drivers and the general motoring public. TravelCenters of America operates nearly 650 full-service and quick-service restaurants and 10 proprietary brands, including Quaker Steak and Lube®, Iron Skillet® and Country Pride®. For more information, visit www.ta-petro.com.