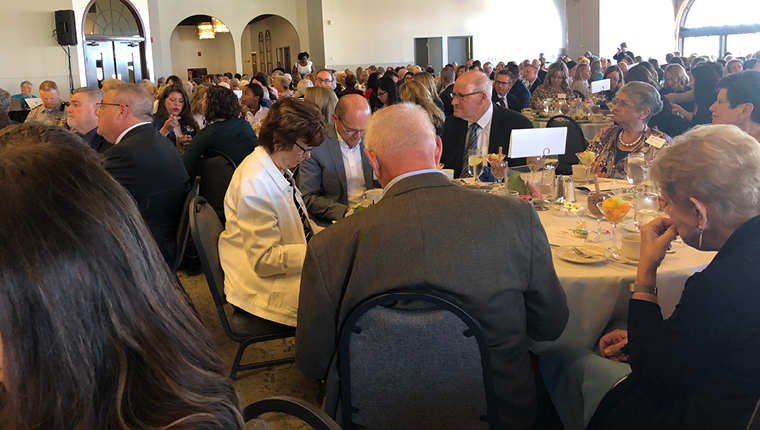 TravelCenters of America was the presenting sponsor of the Collaborative to End Human Trafficking’s 2019 luncheon, “CLE unites to end human trafficking.”

President and Chief Operating Officer Barry Richards introduced keynote speaker Kendis Paris of Truckers Against Trafficking. Kendis delivered a moving speech about the importance of raising awareness of human trafficking, specifically to truck drivers. She spoke about Barry’s passion, thanking him for advocating on her behalf and creating a place for her in the industry. She thanked TA for being the first truck stop to sign on in 2011 and for its continued commitment.

The Collaborative to End Human Trafficking’s President and CEO Karen Walsh said TA was a role model and example about the remarkable change and impact that can happen when leadership steps up and takes on a cause. The event was hosted by WKYC’s Monica Robins and approximately 400 people from around Northeast Ohio attended. It was held at Windows on the River.

TA Reports Q2 Results
Mobile Maintenance Technician Comes to the Rescue
Nothing Separates This Pittie from his Hooman (thanks to Petro's Pete Lyons)
Truckers Against Trafficking Exhibit Visits Greensburg, IN
TravelCenters of America Named Among Top Workplaces in Northeast Ohio
TravelCenters of America Celebrates 50 Years with $50,000 of Giving
Facebook Twitter