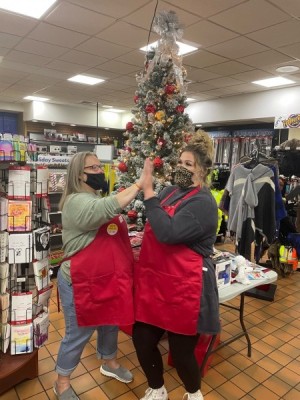 Imagine losing your wallet at the beginning of a vacation. Talk about ruining your day – or week! Luckily for a motorist named Brad, another guest saw the wallet on the ground near the fuel pumps at TA Commerce, Georgia, and turned it into the cashier.

Realizing his wallet was missing and already hours away, Brad called our Commerce site hoping that his wallet was there. Not knowing that it had been found, Stephanie Morrow, CSR, searched through the trash cans at the pumps. This was during the third shift and the next morning when Jim Darden, GM, heard about the lost and then found wallet, he entrusted Brandie Brown, Lead Cashier, to keep it safe.

When Jim arrived at the site, he looked for identification and saw it belonged to Brad. Jim looked for a phone number to contact him, but that wasn’t so easy. After a couple of other attempts, Jim called the phone number on Brad’s insurance card knowing they might not be willing to tell him Brad’s number. They did the next best thing. They put Jim on hold and called Brad. Brad’s wife answered and said he would be ecstatic to get the good news. He got on the phone and told Jim he was in North Carolina and would drive back to Commerce. Two and a half hours later Brad happily reunited with his wallet and the helpful TA team.

Jim says, “I’m very proud of my team considering how many people handled the wallet and all that was in there.” When Brad got his wallet, his credit cards and a substantial amount of money remained. Jim continues, “I think our team showed our values here at TA. We took the opportunity to make it right for a guest.”

Brad got back to North Carolina that night at 10:30 with his wallet and a deeper appreciation for TA.

He wrote Jim a warm email and included the following, “All of you went above and beyond, and it reflects well on both the people and TravelCenters of America. It is customer service at its finest and human compassion at its best. Please accept my heartfelt thanks and convey them to your associates.”