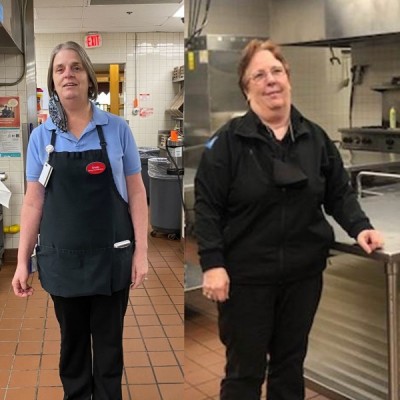 A 92-year-old woman would have been alone and without a Christmas dinner if Shelly White-Shoots, a server at our Iron Skillet at Petro Waterloo, NY, hadn’t kindly responded to a call on Christmas day.

From an online compliment, we learned that a family was supposed to gather on Christmas, but one of their family members was exposed to Covid and all holiday plans were canceled. A gentleman wrote, “My mom is 92 and was not only going to be alone but had no Christmas dinner.” He lived out of town, so he called several restaurants and grocery stores near his mother and couldn’t find any that could send a meal to her. He called the Iron Skillet and was lucky to have Shelly answer. She assured him our team would put together a nice meal for his mother, and Shelly even volunteered to deliver it. The son wanted to use his credit card over the phone to pay for the meal and Tracey Templeton, Restaurant Manager, said, “We don’t need your credit card, we’ll take care of it.”

Shelly drove about ten miles to deliver the Christmas dinner: ham, turkey, dressing, sweet potatoes, green bean casserole and pumpkin pie. Tracey says they made sure there was plenty because, “Everybody needs leftovers from Christmas.” After refusing a tip, and seeing the elderly woman alone on Christmas, Shelly stayed a bit to chat and try to make the day a little more festive for someone whose family couldn’t be there.

Tracey says she thanks Shelly “for being such a vital part of our team.” Once again, our team members showed how kind they are and how willing they are to improvise and, literally, go the extra mile to brighten someone’s day.