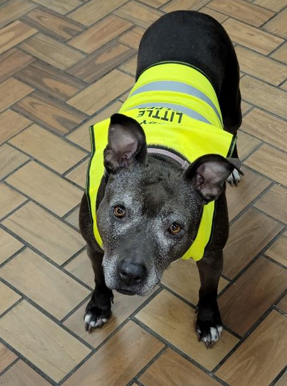 Professional truck driver Kevin Pippenger has been visiting the Petro Monee, Illinois (site #367) for 12 years. Nine of those years, his service dog Harley, who sports a TA nametag and vest, has tagged along. “It’s like family when I go there,” he says.

The Petro team members know the bond Kevin and Harley share and they have formed a special bond of their own with the blue nosed pit bull. When Missy DiDomizio, site general manager sees Harley prance in the store, on cue she escorts her to the dog treat aisle to pick out a pig ear. It's a routine Missy and Harley both look forward to every visit.

“She really loves her,” says Kevin.

When Kevin recently became ill on the road, he had no one to call except his ‘family’ at Petro. He knew a hospital visit was in order, but he was concerned about Harley. Who would take care of her?

His worries were alleviated when Reserve Lot Attendant Pete Lyons stepped in. Pete agreed to take Kevin to the hospital and care for
Harley if Kevin was admitted.

“What he did was the most amazing thing,” explains Kevin. “He didn’t have to sit in the hospital while waiting for me to be admitted, but he did.”

Kevin remained in the hospital for eight days. He was distraught without his dog. "I couldn't sleep." That quickly changed when Pete came to visit with Harley in tow nearly every day!

“He didn’t have to bring her to the hospital to visit me, but he did. I can’t put into words how I feel about what Pete did for me. I just can’t thank him enough for keeping my baby safe.”

In addition to Pete's extraordinary kindness, Kevin describes Pete as “a massive asset the company” due to his equally extraordinary work ethic.

“He works so hard caring for the lot and showers and never complains. He is a genuine 100% great human being. Eight days taking care of
someone else’s dog? Who does that? There’s a special place in heaven for a person like that.”

Pete Lyons does that, and we are grateful he is on the TA team!