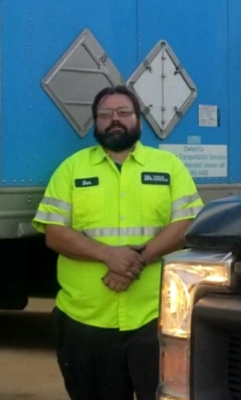 It’s a sight no one wants to see – but it’s one Master Technician Dan Thompson of Mobile Maintenance Chicago Onsite couldn’t un-see. As he was traveling, a semi-truck four cars in front of him suddenly lost control and careened across all three lanes of traffic crushing a car into a concrete barrier. The car had crumpled like a piece of paper. “My jaw dropped,” said Dan. “I thought for sure somebody was no longer going to be with us.”

Dan pulled his truck into position to block the lane. As he safely exited his vehicle he noticed a woman crawling from the car. That’s when he said, “instinct kicked in to go help someone.”

He helped the woman through the mangled mess when he noticed she had suffered a head injury and lacerations to her face. “I was focused on making sure she remained conscious,” he said. Just then, he witnessed movement in the backseat. Two young children were attempting to crawl through a shattered window. Worried they would injure themselves on the broken glass, he directed them to take the same route out as their mother.

“They were pretty shaken up,” he said. “I looked them over to make sure they had no injuries and then I tried to keep them calm.” While waiting for help, the mother expressed her gratitude to Dan. “She was just happy to be alive and breathing and that her children were good,” said Dan. “It’s incredible anyone survived that impact.”

“I am in awe of his heroics,” said Michael Lanigan, Truck Service Regional Operations Specialist. “He stopped and he took action. At the end of the day, it’s a miracle they are alive.”

Exemplifying the most important values of TA, Dan is being honored with the TA President’s Award from Barry Richards for the empathy and compassion he showed that day .

TA Reports Q2 Results
Nothing Separates This Pittie from his Hooman (thanks to Petro's Pete Lyons)
Truckers Against Trafficking Exhibit Visits Greensburg, IN
TravelCenters of America Named Among Top Workplaces in Northeast Ohio
TravelCenters of America Celebrates 50 Years with $50,000 of Giving
Home Away From Home Experience for Driving Duo
Facebook Twitter