Home Away From Home Experience for Driving Duo 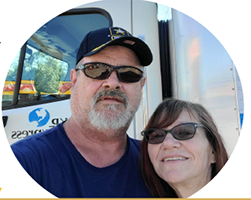 Kimberly Davis and her husband Daniel have only been professional drivers for seven weeks. But in that short period, they've formed strong opinions about the truck stops they’ve visited. Some good, some not so good. When they find a good one, or a bad one, they are sure to share it with their fellow road warriors.

"I have an app with reviews of 1500 sites alone," said Kimberly. "Truckers are always looking at these reviews to find a good place to stop, and they won't go to a site that has a bad one."

The couple’s recent travels brought them to the TA in Rogers, Minnesota (site #190). “That one was the best," said Kimberly. "Everyone greeted us. Everyone was smiles. We were so impressed."

After leaving their 9 to 5 jobs for the road, Kimberly said the transition was an adjustment. “This job has been a definite culture shock from having our own home and amenities to having a 24-hour job, and no shower or laundry room or bed or privacy. Coming to this TA was amazing! We have pretty high standards, and they set the bar really high.

Kimberly said they drive 2-4 loads a week and when they walked into the Rogers, MN site, they we were blown away.

"It had to be the most immaculate store we've ever been in. The food was good, the selection of merchandise was great, and the showers were clean. That store has by far been the nicest, cleanest, and one of the friendliest ones we have come across!”

The driving duo didn't stop their praise for TA in Minnesota. They claimed to have had a similar experience at the TA in Battle Creek, Michigan (site #242).  "It was fabulous and clean with an amazing staff,” said Kimberly. Being relatively new to the road, Kimberly and Daniel said their experience at both TravelCenters was so good, they look forward to a return visit.

"You're our home away from home."

Home Away From Home Experience for Driving Duo