Easter Egg Hunt Brings Everybody Together 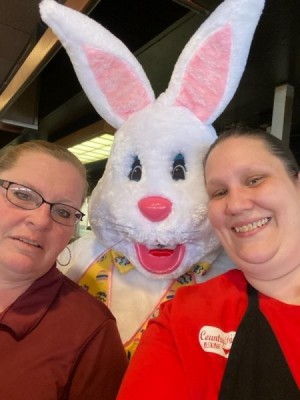 It all began when Richard Dunston, FMT at TA London, OH (site 024), was walking through a store and saw a cheerful-looking bunny costume. He started thinking about the possibility of having an Easter egg hunt at his site. As far as he knew, there hadn’t ever been one there, and it would be a wonderful way to reach out to the community.

Richard spoke to Angela Stanley, Store APCM, and she was on board and soon after so were all their team members. Angela says they handed out colorful fliers and posted information on Facebook. Team members donated bags of wrapped candy and Angela, along with cashiers and servers, filled 1,600 eggs with candy.

The day of the event, Sunday, April 10, was a balmy 60 degrees and about 100 children with parents, grandparents and dogs enjoyed two hours of fun. In addition to the successful egg hunt, there were pictures to color, stencils to create with and luscious Easter-themed cookies to decorate. Angela says it was a way to get the community involved and to show them that we’re here for them. It also brought together the team for a fun project.

Josh Grayson, Store Specialist adds, “I can always count on team London to go above and beyond in how they treat their guests and team members. They really went the extra mile for this event. The result is that we now have community members who feel more a part of the TA family, and a TA family who came together, had fun and were truly appreciated.”

Easter Egg Hunt Brings Everybody Together