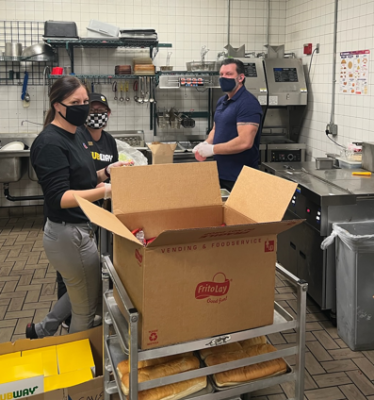 When Cynthia Montoya, Corporate Food Specialist, received a Subway EZ-Cater order for $2,155, her immediate reaction was to act quickly. She wanted to make sure our TA Boise, Idaho, location had enough product to fulfill the order. When she called DM Joe Piercy, he responded right away and assured her they could make it happen.

Three days later, Cynthia received a second Subway EZ-Cater $2,155 order. She called EZ-Cater to ensure that this was not an accidental duplicate order. The order was real; the original guest was so pleased with the first order that they ordered again.

Cynthia called Joe and let him know about the second order. He sent her a brief email that said, “The 2nd 2K catering for Boise Subway this month… making sandwiches tomorrow.” He changed his schedule so he could go to the site to help his team fulfill the order. In just over 3 ½ hours, he, Christina and Betsy completed the second round of 240 sandwiches plus accompanying items. His positivity and hustle motivated the Boise team who made getting the order together a priority.

Cynthia says Joe earned a lot of respect from his team and from her. She adds, “His team nailed $4,310 with two catering orders.” They were responsible for refueling a group of people, not their vehicles, and figured out how to do it with efficiency and the ultimate teamwork.